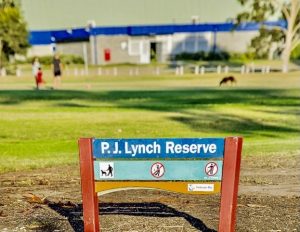 P J Lynch Reserve is located in Mills Street Altona North is the home of the Lacrosse Centre, Bayfit Leisure Centre and the Altona Lacrosse Club. Originally the site was the briquette storage area owned by the State Electricity Commission but was taken over by the then Altona council. In 1969 the area was designated to be a Reserve (by council) and was given the name of P J Lynch Reserve to recognise the service of Altona councilor Patrick Joseph Lynch.

Patrick (Pat) Joseph Lynch was elected to the Altona council in August 1967 and served until his retirement in August 1976. During this period he served as the Mayor for one term (1971/72). When first elected, Pat and his family were living in Blackshaws Road, Altona North and had lived in the area for about 15 years. He was a master painter by trade and had been keenly interested and active in a number of community activities including the Altona North development, Altona North Youth club, Ratepayers Association and the St Paul’s Junior Football club. Pat was very active in his local church and in the area of social work.

Both Patrick and his wife Bridget (Bridie) were born in Ireland before migrating to Australia. Bridget, as well as Patrick were actively associated with St Leo’s parish where Bridget was a member of the parish council.

In 1976 Cr Patrick Lynch made the decision that 9 years as a councilor was enough and it was time for him to move on to other pursuits. At the time he had been the councils representative on the Port Phillip Authority, had served a number of years on the Altona Hospital’s board and the Altona North Technical school’s advisory council. He was replaced on council by Daniel Duane.

After retiring from council, Patrick, Bridget and their family remained living in Altona for many years and during that time continued to work for and within the community including their parish church of St Leo’s. Bridget Ann Lynch passed away in April 1995 and Patrick Joseph in August 2012. They are both buried within the Altona Memorial Park. 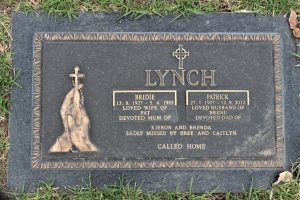