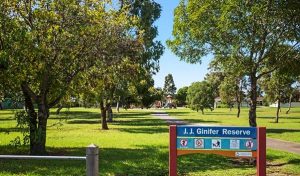 J J Ginifer  Reserve is located off Chambers Road, Ginifer Avenue and Cooper Avenue in Altona North. In the early years of the 1960’s the area was designated to be a Reserve (by council) and was given the name of J J Ginifer Reserve to recognise the service of Altona councilor John Joseph Ginifer.

John Joseph ‘Jack’ Ginifer was born in Warracknabeal, 31 August 1927 to Joseph Ginifer, a Singer sewing machine salesman from England, and Agnes Harper. He was educated at schools in Benalla and then undertook teacher training at Melbourne Teachers College and then completed Bachelor of Arts at the University of Melbourne.

He worked as a schoolteacher for more than twenty years from 1945 to 1966, including at Jamieson St Primary School in Warrnambool, Shepparton, Tallarook, St Albans, Yearinga and Stewarton. In 1951 he married Audrey Christina Heaney of Stewarton, also a fellow teacher, at the Benalla Holy Trinity Church.

John Ginifer was active in local government politics, serving as a councillor in the Williamstown City Council 1955–1957 and then the Shire of Altona 1960–1969 including the Shire President in 1964/65. He was also on the state executive of the Labor Party from 1959 to 1966.

In 1966, Ginifer was elected at a by-election to the Victorian Legislative Assembly as a Labor member for the seat of Grant, will undertaking this role he also remained a councillor of the Altona Shire. Electoral redistributions saw his seat renamed Deer Park in 1967 and Keilor in 1976.

On 8 April 1982, Ginifer was made a minister in John Cains first cabinet as Minister for Consumer Affairs and Minister for Immigration and Ethnic Affairs, but he resigned from those posts, and from the parliament, a month later on 10 May, after being diagnosed with terminal cancer. He died two months later, 9 July, aged 54.