A reserve surrounded on three sides by homes in the “Noordenne Estate,” providing leisure activities for a range of ages of nearby residents, accessible from both Noordenne Avenue and Waters Drive, Seaholme. 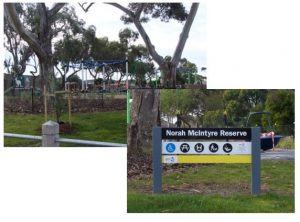 Named after Honorah Rachael McIntyre (1916-1970), an Altona resident whose maiden name was Grieve. Norah was a member of the local pioneering Grieve family whom Grieve Parade was named after. They ran a successful dairying business on properties bordering Kororoit Creek Road and the farm “Kororoit Park” located in the area of the present Toyota factory in Altona North, originally established by the pioneering Cherry family.

Norah was also the sister of Cr Catherine McIntyre who was a member of the first Altona Shire council after the community seceded from Werribee in 1957. The two Grieve sisters married two McIntyre brothers.

The reserve was first established in 1975 and named after Norah to acknowledge her considerable contribution to the local community. A very notable one was when Norah together with her sister Catherine, donated £10,000 to build a convent establishing the Sisters of St Joseph in Altona.

In 2019 the reserve underwent a major upgrade with the installation of a larger range of equipment for the younger set, a half court for older basketball enthusiasts, new landscaping and plantings, renewed pathways and furniture, and the addition of the post and rail fence. The new look reserve was reopened in January 2020.