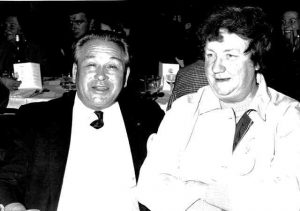 Henry (Harry) Charles Thomas Lee Kim could easily be described as a ‘Jack of All Trades’. He was one of a number of key people who strived for Altona to succeed from the Werribee council in the late 1950s. Harry was born in Bendigo on 9 February 1895 to parents William Lee Kim and Ellen Lee Kim (nee Plowright).  He was the second youngest of five boys born to the couple.

Harry married Iris Merle Linz (1894-1963) at St Paul’s church, Bendigo, on 27 February 1917. Together, they had eight children. At the time, Harry worked as an orchardist, in the footsteps of his father. In 1919, the family moved to Footscray for two years, where Harry then worked as a Wool Presser. Upon moving back to Bendigo,  Harry worked as a musician, eventually joining a dance band where he played the saxophone and clarinet. This occupation did not earn enough on its own though, so he also worked as a labourer within Bendigo.

Harry came to Altona in the late 1930s, residing then in Lily Street (now Grieve Parade), where he established a poultry farm. Within the Altona community, he adopted the nickname of Harry, which he continued to go by whilst living in the area. By the time Harry moved to Altona, he had separated from Iris, who remarried in 1942 and continued living in Bendigo.

Working multiple jobs, the poultry farm was not Harry’s only source of income. He continued as a musician, playing in a local dance band, and commenced employment as a real estate salesman. In 1943, Harry married Clytie Ella Paulsen (1912-1988) and the couple continued to operate their poultry farm in Lily Street.

Harry opened his first Real Estate agency in the one shop situated on Sargood Street, before later moving to 93 Pier Street. He also built his own premises in Railway Street and following this, he opened agencies in Werribee and Laverton. In about 1954, he opened a furniture and hardware business in Pier Street which has now become a sporting goods store.

Harry first entered local politics and represented Altona when it was a Riding of the Werribee Shire.  Whilst he stood as an independent, he fully supported his two Labor endorsed councilor colleagues. He was a key driver in the movement for Altona to gain its independence from Werribee. He served a three-year term commencing in 1953 Harry was a member of the inaugural council of the Shire of Altona elected in May 1957, ultimately becoming Shire President in 1957-58, but he was not reelected in the August 1959 elections.