Edward Blackshaw held 350 acres of land at the west end of the road that now bears his name, around the late 1850’s to 1890, where the family kept pigs and other animals for slaughter. Blackshaws Road runs eastward from what was the Brooklyn bridge to Williamstown.

Edward Rowse Blackshaw was born in 1850 in Northamptonshire, to parents Edward and Sarah Blackshaw. The family arrived in Victoria around 1853 where they moved initially to the Sydenham district before moving to the Altona/Brooklyn district and purchased farm land.

Edward Jnr married Clara Griffiths (1849 – 1927) on 23 October 1871 in Wesleyan Church, Punt Road Prahran and over the next 25 years they had 14 children, 7 sons and 7 daughters. Edward Snr passed away in 1864 (aged 44) and it appears that Edward Jnr and his brother John took over the running of the farm and business until they sold or leased part of the property t Charles Newport, who operated a licensed slaughterhouse.

In March of 1872 Edward appealed to the Werribee Shire council to improve the road as the Blackshaw’s found it difficult to navigate their wagon along the road to market. He was advised that they would provided that he put broader ‘tires’ on the front wheels of the wagon to spread the load more evenly and reduce damage to the road surface. He complied by placing 6 inch wide metal bands as wheel tires.

It appears that Edward and Clare sold and moved to Yarragon, in Gippsland around 1890 and settled into rural life there and join into the local community. Edward took up a role as a member of the Board of Guardians of the local Church of England (St Marks).

Edward passed away on 11 October 1920 in Yarragon, at the age of 70. The local newspaper noted ‘one of Yarragon’s oldest residents, in the person of Mr E Blackshaw has passed on. He was very well known, and was a most sterling character. Though he never took a prominent part in public matters, he was very staunch in support of clean, straightforward dealing in all matters, whether public or private.’ Clare passed away on 14 February 1927 in Warragul, at the age of 77.

Blomberg Road was constructed circa 1965/6 and was named to recognise the Blomberg family who were pioneer settlers to the Altona area. Richard Augustus Blomberg and Ellen Louisa Blomeberg nee Fisher arrived in Altona with their family in 1916. He was a fitter and engineer at the Newport workshops but knew Altona from visits and summer holidays with the Williams family. The Blombergs ran a general store, woodyard, post office and newsagency, with a tea garden which was popular with summer visitors. In addition to running their businesses, the Blomberg family was keenly involved in local affairs and organisations such as Progress Association, Ratepayers’ Association, ANA Lodge, the Community Hospital and the Horticultural Society. Richard and Ellen lived with their family in Altona for many years before Ellen passed away in 1958 and Richard in 1960. 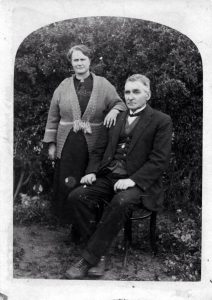 Duke Street Altona North is another of our streets that has been named to honour not only one of Altona’s pioneering families but a man who gave so much to our community. James Francis Duke was born in 1863 in Newham, Victoria to parents George and Anne Duke.  James married Mary Margaret Bell in Fitzroy on 9 February 1888 and they had 12 children, many of whom had reached maturity by the time the family moved to Altona in 1917.

When they first settled here, they lived in a tent whilst their house was being built in Bayview Street, however it wasn’t long after that the Army acquired their home and purchased them another in Mount Street.

You might have thought that with having 12 children and building a house then moving James would have little time for anything else but he was a man for his community and he gave a great deal at a time Altona was still an emerging district. When James Duke first came to the district there were no churches, so he helped build one. Money was scarce so the Catholic Church was built from the funds he raised by organising functions.

He was also a Commissioner for Affidavits and played an active part in the Progress Association.  He was a founding member of the Altona Life Saving Club, Altona Football Club, and Altona Cricket Club to name some of his achievements. James’ son George was the first soldier from Altona to return home after WWI and his battalion colours were purple and gold. These became the colours adopted by the Altona Football Club and remain so to this day.

James was part of the first committee organising the establishment of a new hospital in the local area, bringing the project to fruition when the doors in Pier Street opened in October 1932. He was described as a tall, stout and energetic man, quietly spoken and a true gentleman. There is a story that he let a man, his wife and large family stay in a house he owned rent free, and he lent money to members of the football club to buy their jumpers.

These two streets, in Altona North, were accordingly named to recognise an early pioneering family of both Melbourne and Altona – the Ross family and in particular David and Johanna Ross.

David Ross was an immigrant from Rosshire in the far north of Scotland who landed in Williamstown in 1840 and soon afterwards married Johanna Madigan, recently arrived from Ireland. Together these two pioneers developed a dairying farm north of the Geelong railway line in the vicinity of Altona Lakes Public Golf Course. The farm was named Shandwick while the homestead they established was called Hatherly. This building was situated just west of the swamp that still exists and fronted Ross Road. Nothing remains of the building now. David Ross purchased another 158 acres south of Blackshaws Road and west of Blenheim Road, three four-acre blocks in the Altona East area on 17/4/1855 and later on he bought four five-acre blocks in the area west of Chambers Road near Kororoit Creek making his total of land purchased at 300 acres.

Ross Road, running parallel with Geelong railway line for some distance, existed before 1886 and would have been named after the Ross family. A nearby railway station built in about 1890 was named Hatherley Station, later to be rebuilt and renamed Paisley Station, which now no longer exists.

The street Hatherley Grove was also named after the Ross family homestead. We have in our archives at the Altona Homestead a handwritten letter received in September 1964 from Edith Master, the great granddaughter of David Ross, in which Edith recalls her mother telling her that Hatherley Grove was named after the old homestead and railway station.

The variations of Hatherly and Hatherley are not unusual for names that can have more than one form of acceptable spelling.

Thomas and Elizabeth Jane Meddings and their family were the caretakers of the Altona Homestead between 1920 and approximately 1935. During this time the Homestead was used as a holiday accommodation for the workers of a company in Footscray called Cuming, Smith and Company that produced fertilizer products.

Meddings Court in Altona North was named for Ronald’s association with Altona and his ultimate sacrifice during WWII.

Ronald Meddings joined the Royal Australian Navy in July 1942 (WWII) and following basic training at Cerberus he was assigned to HMAS Australia in November 1943. HMAS Australia with Ronald aboard saw action in the Pacific against the Japanese navy. It was within one of these battles, in early 1945, that unfortunately Ronald lost his life.

HMAS Australia’s five-day action began when she was south west of Manila heading for the landing beaches of Lingayen Gulf. Typical of the sterling work done by her personnel was the coolness of two young gunners who at one stage of the action held their fire until two bombers were within 200 yards, then they fired. One plane exploded in mid-air and the other struck the water in flames.

The successful conclusion of this latest and most dangerous operation was in Itself a tribute to the meticulous care with which all phases of the operation had been planned, said Mr. Makin.

The dramatic events attending the passage of the convoy were matched by the cold courage of the men in the mine sweepers and survey ships, and by the devotion to duty of the “small-ship” men, who maintained communications and convoyed supplies between the mainland and General MacArthur’s forward base.

To these men he would like to pay a special tribute. He had recently experienced a voyage in a frigate, where he had seen something of the zeal and adapt ability of the men of the R.A.N.

Their spirit was that of their comrades in every ship of every size. When H.M.A.S. Australia was in action on October 21 she suffered 63 casualties— 19 killed. including Captain E. Dechalneux, and 54 wounded, Including- Commodore J. A. Collins. The Age, 27 Jan 1945

Millers Road, that stretches from Brooklyn, in the north, to Seaholme, in the south, was named after one of our early pioneers Thomas Miller. Thomas arrived from Durham, England to find his fortune in the Victorian Goldfields, but later became a carrier and transported goods and suppliers to the miners. In about 1867 he purchased a farm at what is the northern end of Millers Road at the junction with Geelong Road, and grew hay for the Melbourne market. In 1876, Wyndham Council began the construction of the main road that fell within its jurisdiction.

Thomas Miller built and operated the ‘Half Moon Inn’ at the junction which was used by many migrants who had arrived via the Williamstown ports and were heading for the goldfields. The picture below shows the original building with Mrs Miller, holding the young child, standing under the verandah. The verandah was later removed when the building was converted and operated as a post office for about 42 years. 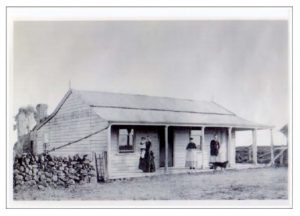 Family member, Stan Miller, constructed a brick house on the site for his family, but the house later made way for a Milk Bar and a Caravan park which remained until the land was sold in 2010 and the caravan park ceased operation. 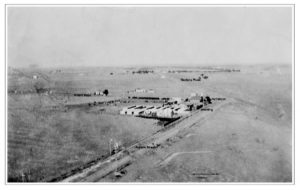 Stuber Road was constructed just off Grieve Parade, within the industrial area, around 1966/67 and was named to recognise another of Altona’s pioneer families – Albert August Stuber, his first wife Eva Stuber nee Seeger (1870-1919) and his second wife Annie Amelia Stuber nee Price (1873-1959). Albert was born in Germany and came to Australia in 1901 and to Altona in 1915 at almost the commencement of WWI which would have made it even more difficult to settle in to a small Australian town. Like his fellow pioneer residents, Albert Stuber contributed to the growth and progress of Altona. Together with his son, Albert jnr, the Stuber family assisted new residents with the construction of their homes as they were both carpenters. Albert August Ferdinand Stuber passed away in August 1946 and is buried within the Fawkner Memorial Park (Garden of Remembrance 1, Section 8, Niche OUU). Annie Amela Stuber passed away in 1959 and is buried alongside her husband.