Sadly Altona has seen some tragic events over the years due to its location alongside the some times unpredictable bay of Port Phillip. Another one we came across recently was the sad loss of two men while fishing in a 5.5 mt boat named “Rosa,” off the shore between Altona and Truganina Explosive Reserve piers, on the last day of 1913. The 15 year old son of one of them made up the party of three and was most fortunate to survive when the sudden onslaught of a storm whipped up the sea causing their boat to capsize. Young Walter testified at the inquest a week later that his father could swim and had knowledge of boating, but sadly they weren’t enough to save himself and his mate from drowning. The wives, and one a mother, waited anxiously on the beach while the tragedy unfolded.

They were Henry Fraser Tatlow and Samuel Boyd, both drowned, and 15 year old survivor, Walter Herbert Boyd. They were all from Newport and were on a camping holiday in Altona when the tragedy happened late afternoon on New Years Eve 1913. An account of their story was published in the Williamstown Chronicle 10 January 1914 and follows below.

Samuel Boyd’s parents migrated from Ireland in 1854 arriving in Geelong with two toddlers and a baby. They established themselves in Geelong and had at least another two children in Australia including Samuel born in 1864. In 1888 he married Lily Wackett and they resided in Milford Street, Newport where they raised their family of five children. Samuel was a blacksmith by profession and worked at the Newport Workshops. Walter, the youngest who was always known as Wally, was a labourer. 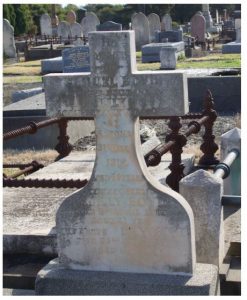 Henry Fraser Tatlow was a boilermaker also employed at the Newport Workshops. Originally born in Stanley, Tasmania in 1869, he lived with his wife Clara in North Road, Newport. They don’t appear to have had any children.

Both Sam Boyd and Henry Tatlow were interred in the Williamstown Cemetery with much fanfare by a community shocked by the loss of these two well respected members. Tatlow’s grave is unmarked.

Following up the grave of Samuel Boyd, we found the family was to suffer another traumatic episode when the brave Walter also died only six years later at the age of 21. Walter was one of 3,561 people in Victoria to die of the Spanish flu pandemic that hit Melbourne in January 1919. Walter died on 3 April 1919 in a bed in the Great Hall of the Exhibition Building. He was interred the following day in the same grave as his father, leaving his mother, Lily, two older brothers and two older sisters to mourn the loss.

The Spanish flu quickly took hold in Melbourne and 500 beds were installed in the Great Hall intended only for convalescing patients. However, as cases grew rapidly the number of beds was increased to 2,000, providing expert hospital care for some of the many sick.

The Spanish flu 100 years ago had many similarities to what we are experiencing now under COVID-19. 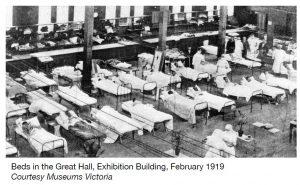 Our borders were closed to international travel, state borders were closed, there were shortages of commodities, face masks were worn every where, and the economy suffered severely. The pandemic lasted two years and the disharmony between the states and territories during this time prompted the federal government to establish its own health department.

That pandemic was named “Spanish flu” simply because the first reports of the virus emanated from Spain and their king was one of the earliest to be infected. It’s not known how the virus came to be in Spain.

There are a number of websites on the internet providing further useful information about the Spanish flu, some of which are listed below in the information panel.

William Smith who tried to save Samuel Boyd, was a fisherman from 38 Stevedore Street, North Williamstown. He too was camping in Altona with his family. William was rewarded for his bravery by the Royal Humane Society in a presentation held at Melbourne Town Hall in July 1914, but we won’t know the details of what sort of award until we can visit a library to check the organisation’s book containing this information, 7000 Brave Australians. COVID-19 Stage 4 restrictions prevent this at present.