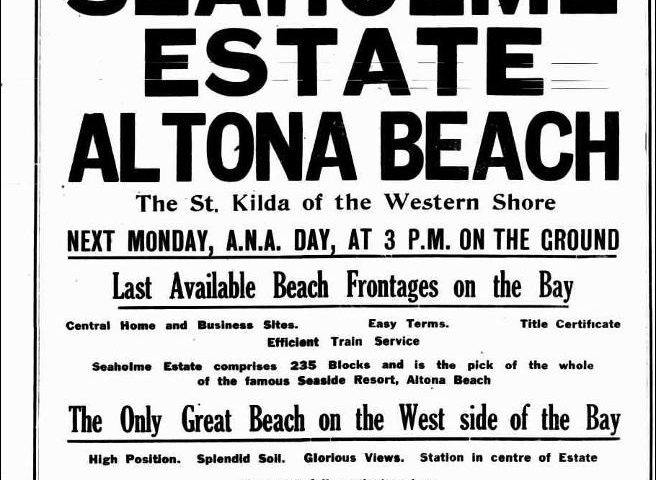 In January 1920 advertisements and articles began to appear in local and Melbourne newspapers announcing the opportunity to purchase prime land in the new subdivision of Seaholme next door to ‘Melbourne’s famous seaside resort of Altona Beach’ and near the ‘only great beach on the west side of the Bay’. On the 26 January 1920 Seaholme became a new suburb and a neighbour to Altona.

Like its big sister, Seaholme also came with a railway station principally built to bring potential buyers in and to transport new residents to their places of work between Newport and Melbourne. A report in the Footscray Independent (24 Jan 1920) quoted ‘Beach frontages on this estate are so situated that they command a view of almost the whole of the bay and yet they are only 200 yards from the station, and the station only 10 miles from Melbourne. The subdivision and land sales were preceded by the extension of Queen Street to the east of what is now Millers Road to Beach Street which lead to the Williamstown Racecourse.