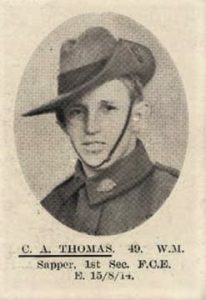 Charles Albert Thomas was born on 2 March 1896 in Footscray to parents John Berry William Thomas and Alice Thomas nee Goodwin. Charles was the youngest child and son born to the couple. His three brothers being William John, John James and Frederick George.

Both Charles Albert Thomas and his brother Frederick George Thomas were not listed on the Old Laverton School honor board but at the time of their return to Australia their parents were living and operated a greengrocery and mixed business at ‘Altona House’ situated on Pier Street Altona Bay. It is with this connection to Altona Bay that their story is recorded here.

Charles Thomas enlisted at the age of 19 years 5 months on 1 September 1914 and was assigned to the 2nd Field Company Engineers at the rank of sapper. Prior to his enlistment Charles was employed in Prahran as a boilermaker and had spent time in the local military cadets. Like his brother and stepbrother he embarked from Melbourne just one day later on 21 October 1914 aboard HMAT A3 Orvieto.

The first destination for the 2nd Field Company Engineers was Alexandria where the engineers undertook additional training to ready themselves for the kinds of situations that they were likely to confront in the field of battle. Their training ended in April and the company and Sapper Thomas were thrust straight into action at Anzac Cove, Gallipoli where they landed with so many others on 25 April 1915 at 7.00am. Their first objective was to secure a water supply that would support the 500 animals and provide drinking water for the troops.

This required the engineers to quickly sink tube wells in and around the area known as Shrapnel Gully and then construct a dam across a local stream, deepen this to ensure an ample and ongoing supply of water and arrange transport to various areas where troops had now dug in. This key piece of work and other allocated tasks that they were required to undertake was always under heavy artillery and rifle fire. The only reprieve for young Sapper Thomas was when he took ill with tonsillitis in late May and was evacuated to the 3rd Field Ambulance for ten days of treatment over a period before returning to the company.

Charles remained with the engineers at Anzac Cove until December 1915 when the entire force was evacuated out to Egypt for rest, training and to regroup with reinforcements who had arrived fresh from Australia. It is at the end of his stay at Anzac Cove that Charles was promoted to the rank of lance corporal. Lance Corporal Charles Thomas was also mentioned in despatches for distinguished and gallant services rendered on 12 to 14 December 1915 at Gallipoli during his time with the Mediterranean Expeditionary Forces under the command of General Sir Charles Munro. This recognition was later published in the Fourth Supplement No. 29664 to the London Gazette of 11 July 1916. Charles may have also been mentioned in despatches again in France in January 1917.

The company then spent three months in Alexandria before they and Lance Corporal Thomas joined the British Expeditionary Forces in France disembarking in Marseilles on 30 March 1916. Initially the troops found a pleasant land and a welcome change from sea voyages, the cliffs of Gallipoli, and the training camps of Egypt. By mid-April Lance Corporal Thomas had moved up to Fluerbaix (France) where the 2nd Field Company Engineers took over the preparation and maintenance of the defences from the 6th Field Company Engineers. On this battleground the opposing trench lines faced each other across a flat, boggy and overgrown no man’s land criss-crossed with drainage ditches and a small stream. Because of the high-water table, the trenches were mostly above-ground, not an easy situation for the engineers to cope with in their efforts to strengthen defences when the enemy held the high ground.

In July 1916 Charles’s rank was reduced from lance corporal to sapper following an altercation with an officer which also saw Charles lose a month’s pay. The company moved to Bailleul before joining the 2nd Infantry Brigade at Villers then on to Varennes, Albert and then by the end of July they had reached Bereaucourt. It was here that they commenced the construction of trenches and other defensive works in preparation for the Battle of the Somme. Charles remained with his company until mid-October when he was transferred to the 2nd Field Artillery Brigade as a gunner.

Gunner Thomas joined the brigade just after the Battle of Menin Road. In September, the 1st Anzac Corps enjoyed the relative quiet of Flanders, but then on 9 October 1916 was ordered back to the Somme where battles dragged on in deteriorating weather conditions and appalling conditions of rain and mud. The Somme campaign, which had provided the Australian gunners with a demanding introduction to modern warfare, ended with the Battle of Flers in early November 1916. The unit war diary for the 2nd Field Artillery Brigade indicates that on 14 November 1916 alone enemy shelling was above normal and that 8” and 5.9” shells fell near its batteries and that there was also a high level of enemy aerial activity including both balloons and aeroplanes. As a result of the unsuccessful attack on enemy lines during the period of 6 to 14 November the 2nd Division saw the loss of 901 men.

Gunner Thomas remained with the brigade through to March 1917 having moved rank to a driver in January 1917. He was transferred across to the 1st Division Signal Company in March who were located at Fricourt Farm in Somme, but shortly afterwards moved to establish new headquarters at Chateau Baizieux.

The 1st Division Signal Company was tasked with providing communications from the headquarters to those of subordinate formations. This would be by a combination of telephone (requiring the laying of line) and limited radio towards the end of WWI. A line was buried where possible but it would often be cut or broken by artillery fire. Then it would have to be surface laid to maintain communications. Laying line was one of the most hazardous jobs in the front line. The ‘linies’ had to move across ground carrying a reel of wire. They could often be the only moving thing on the battlefield and thus attracted fire – both small arms and even artillery fire. Hence the task was often performed at night with the added risk of getting disorientated on the battlefield. The ‘linies’ also had the unenviable task of locating and repairing breaks in the line whilst sometimes out in the open and therefore prime targets for enemy fire.

‘Power buzzers’ were also deployed forward to boost the signal being borne by the line. Later when radio began to appear, signallers would have to erect antennas / aerials, often exposing themselves to enemy observation and fire in the process. As antennas are invariably associated with there being a headquarters, they would also attract the unwelcome attention of the enemy artillery forward observers. On 20 February 1918 Charles requested that his rank be reinstated to a sapper which was granted and he retained during his remaining time with the 1st Division Signal Company. The company worked in tandem with the 5th Division Signal Company laying lines and moving wherever the front and headquarters moved. During the period to October 1918 this included Bancourt, Bray, Dernancourt, Baizieux, Lumbres, Lille Gate, Merris and Villers-Bretonneux.

In mid-October 1918 Sapper Charles Thomas was granted ‘Special 1914 Leave’ in the ‘B’ draft which was extended leave to Australia granted to those who had joined the AIF in 1914. He appears to have embarked from England on 23 October aboard HMS Voyager arriving back in Australia mid-December in time to spend Christmas with his family and brother Frederick in Altona Bay. Charles had endured four dreadful years of war at Gallipoli and in France and Belgium and other than a few small infections returned unscathed to his family not only to celebrate Christmas but with the news that peace had been signed and the war was at an end. He would have right to have assumed that he and his brother would not have to return overseas and that their discharge from the AIF was imminent.

It must have been a joyous occasion for the family and particularly Mrs Thomas who had already lost a son to the terrible war, but she now had her two youngest safely at home. However, on a wet and rainy Boxing Day morning everything was about to change for the Thomas family and the small community at Altona Bay. Frederick and Charles along with their 14 year old cousin Ernest Goodwin set out in the family horse drawn covered wagon for Victoria Market to purchase stock. A little before 5.00am approaching O’Hara’s rail crossing on Maddox Road, there was a fatal collision between the wagon and the goods train from Ballarat. Two of the boys died immediately from their injuries and the third succumbed soon.

A few hours after the accident, Mr John Thomas, father of the two soldiers, took the train at Altona for the city. He was then unaware of the sad fatality, but, looking out of the window of the train at O’Hara’s rail crossing, he saw the torn cushions and hood and smashed woodwork of the cart and knowing of the young men’s early drive he immediately recognised the debris as belonging to the wagon which he had passed over recently to the use of his sons. On reaching Newport he made frantic inquiries regarding the mishap and to his horror his suspicions were confirmed and he learned of the death of his two sons.

A military funeral was arranged for Frederick and Charles Thomas on Saturday 28 December 1918. Between 3,000 and 4,000 people gathered along Kororoit Creek and Cemetery Roads Williamstown on that Saturday afternoon as spectators of the military funeral of the Anzac brothers, Sapper Charles Albert Thomas and Driver Frederick George Thomas. The funeral left Altona House, Altona Bay, for the Williamstown Cemetery at about 3.00pm. The coffins were borne on two gun-carriages drawn by seven black horses. Each was enveloped in a Union Jack and on top were the overcoats and slouched uniform hats of the two soldiers.

The following were presented to his family: